The items in this collection are shared through a collaboration between the Lehigh Valley LGBT Community Archive and the LGBT Center of Central PA History Project. For more information, visit http://trexler.muhlenberg.edu/library/specialcollections and https://archives.dickinson.edu/lgbt.

The Lehigh Valley Homophile Society ("Le-Hi-Ho") held its first meeting on June 22, 1969. The goal of the group was to provide social opportunities outside of the bar scene for members of the LGBT community in the Lehigh Valley. The society published monthly newsletters (1969-1985) featuring the information relevant to the community, including social events and field trips, activist opportunities and reporting on the national and regional gay liberation movement, and eventually HIV and AIDS. Thanks in part to Le-Hi-Ho’s success and the establishment of other organizations to support the LGBTQ+ community, the organization ceased by the early 1990s.

Citizens Concerned for a Better Community (CCBC) existed from 1977 until 1979 with the express purpose of advocating for an amendment to the Human Rights Ordinance in Allentown, Pennsylvania. The organization existed for over a year, until a ruling that the city government had no right to exceed the powers of the State Human Rights Commission.

CCBC was comprised of activists representing several local organization, including chapters of the National Organization for Women, Le-Hi-Ho, and the Rural Gay Caucus. Activities included demonstrations and rallies.

In June 1978, at a meeting of the Rural Gay Caucus, members voted to create a distinct organization, temporarily named the “Pennsylvania Gay Support Network.” Its purposes were defined as political action, outreach, information dissemination, a statewide switchboard, addressing the needs of the gay community, and maintaining a telephone tree.  The Rural Gay Caucus was dissolved, and by November 1978 the word “Lesbian” had been added to the new organization’s official name. 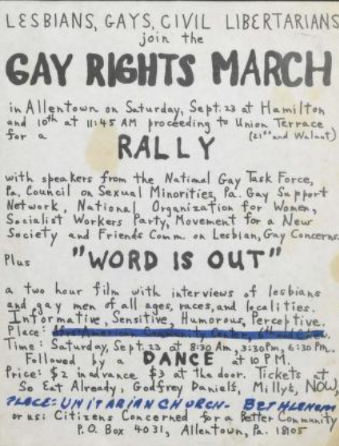